Good morning. We continue to take this crazy year one month at a time. Franklin D. Roosevelt said, “A smooth sea never made a skilled sailor.” The next time you feel that pit in your stomach about these times, remember that it’s just “sea sickness.”

Some of you may have already noticed, but about two weeks ago we updated our website. https://greenstaradvisors.com/. The old one had begun to look tired and the content needed updating.

Recently we have been building some in-house technology around the concepts in Chad’s book Wealth by Virtue. We have some innovative ideas and software tools that we feel would be highly useful to clients and the public. It’s all very early, but as part of our testing, we created a fun tool that tells you everything about the day you were born.

When you were born, what were the most popular baby names? How much was a car? What were the most popular songs? Find out an incredible amount about the day you were born by filling out this form. We suggest accessing this on a larger screen (at least a full-sized tablet) because it’s not mobile friendly yet. Be sure to fill out your birthday in international format (YYYY-MM-DD). For example, December 7, 1941 = 1941-12-07. Click here to learn more about the day you were born or go directly to the home page where this tool is also posted. This tool is more fun than useful, but it showed us that our core technology behind our ideas is possible. There are many things that we are working on that we hope to fully develop over the next year and beyond.

Yesterday (August 4), the price of gold hit an all-time record of $2,031.60 – this is the value of one ounce of gold. For many months we have held gold as a hedge in most of our portfolios. Early in the pandemic, we felt that it was likely that in the face of global uncertainty, gold prices would soar. It was mystifying that this didn’t happen until early June.

Gold is one of the few investments that carry with it a mystique stretching back thousands of years. Have you ever wondered about the history of the gold in your jewelry? Perhaps the very chunk of metal was unearthed by Egyptians, decorated a Pharaoh’s tomb that was pillaged by a grave robber, and then changed hands among Phoenicians, Carthaginians, Greeks, and Romans eventually finding its way to your diamond ring finger. It is the nature of human hubris to assume that the objects around us are so temporary, when we are the ephemeral ones.

The history of gold in the United States is far less mysterious, but there are some misconceptions. We thought it would be interesting to briefly walk you through it, and to also explain that while gold is a current holding in our portfolios, it’s generally not a good long-term investment.

For the first 100 years of the United States, we used various methods of backing up our currency (sometimes using gold, silver, or other currencies). In 1879, the U.S. went on the gold standard which meant that anyone could exchange U.S. dollars for physical gold. Often other nations would export U.S. gold – which was only prevented during WWI.

From a practical matter, you could go into a bank with dollars and walk out with physical gold. This sometimes led to gross hoarding as with Scottish business magnet Scrooge McDuck:

During stable times, this free exchange of gold can actually strengthen the currency. However, if too many people are turning in their dollars then it is deflationary (less money chasing goods). During the Great Depression, people lost faith in banks, our financial system, and U.S. currency. In addition to runs on the banks, people were hoarding gold.

Shortly after FDR took office in 1933, he declared a moratorium of this gold exchange. This was in an effort to increase the money supply and turn around the past three years of deflation. On April 5, 1933, Roosevelt effectively nationalize gold ownership and ordered all gold coins and certificates greater than $100 be turned in for other money by May 1 for the set price of $20.67 per ounce. It’s hard to imagine such an order going over very well today.

On June 5, the U.S. partially went off the gold standard which meant that currency values fluctuated based foreign exchange rates. In 1934, the price of gold was increased to $35.00 per ounce which inflated the money supply. The price remained steady for the next 37 years. As normal inflation gradually eroded the value of the U.S. dollar, the price of gold was forced downward (in real money), thus increasing demand for it.

On August 15, 1971 Nixon announced that the United States would no longer covert dollars for gold at a fixed value, thus completely abandoning the gold standard. In 1974, Ford signed legislation again allowing Americans to personally own gold bullion. In 1976, the value of a dollar was completely decoupled from the price of gold.

Gold as an Investment

Gold is generally not a good long-term investment. Yes, we say this as we hold a portion of it in most of our portfolios – where its function is more of a hedge against unusually uncertain times. If you used our Birthday Tool a moment ago, it told you the price of gold on the day you were born. Unless you were born right before we went off the gold standard, it’s likely that you’d make more money in most other asset classes. We believe that this will be the case going forward.

Let’s imagine two choices. Behind Door #1 is all the gold ever mined in human history and behind Door #2 is what you could buy for the same amount of money.

To get a mental image of Door #1, it’s estimated that a total 197,576 tonnes of gold have been mined ever (source). This would be a cube of gold measuring 72 feet on a side. Or to put this visually, this would fit neatly within a baseball diamond like this at Fenway Park:

We hope that guy’s okay. That giant cube is 6.3 billion ounces of gold. At the current peak price of $2,031.60 this cube would be worth $12.8 trillion dollars. Or, for the same amount of money (Door #2), you could buy the entire island of Manhattan, all farm land in the entire United States, the five largest banks in the U.S. (Chase, Bank of America, Wells Fargo, Citi, Goldman Sachs), the five largest insurance companies in the World (AXA, Allianz, Prudential, Nippon Life, Berkshire Hathaway), Apple, Microsoft, Google, half of the global oil industry, and still have another $500 billion in spending money.

To logically weight the better choice between the options, with Door #2, over the next 100 years you would additionally enjoy all the farm land income, rental income from Manhattan, and dividends from all of these companies. Not only this, but it’s likely that the asset values would increase as well.

Alternately, with Door #1, in 100 years would have a giant cube of gold which never gave you any income, interest, or dividends. Again, we use gold as a hedge and do not see it as an investment per se – even as we enjoy the price bump with a tip of the hat. 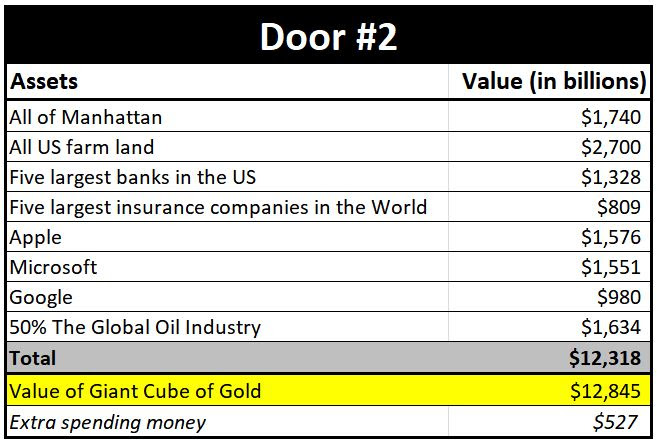 Sources: Value of Manhattan, US Farmland, Global Oil Industry. All other asset values based on recent market cap.